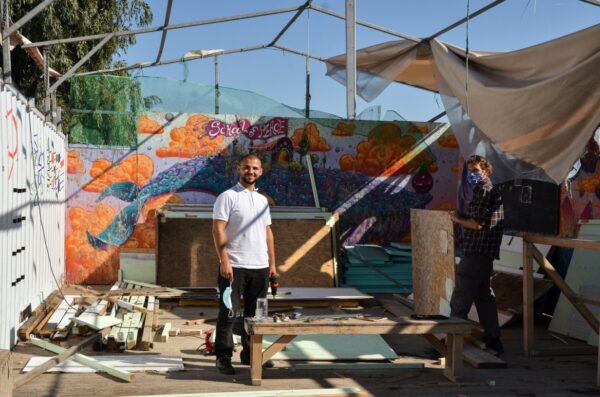 Meet Mohammad… or Bacha, as he is affectionately known!

He was born in 1996 in Syria, where all of his family remain.

Mohammad is the smiler of OHF and is full of effervescent positivity, with a love for music, which he likes to play LOUD!

He first came to the centre as a visitor; then, after the fire last year, he joined the cleaning up works, helping to rebuild One Happy Family. He soon became part of the team and officially joined OHF when we were able to open again.

Although Mohammad has never been to school, he began to learn English when he joined us, and he has already progressed to a higher level!

Instead of school, Mohammad started work at the age of 12; so far he has been a welder, a barber and a tailor, amongst other things, and now he is an OHF all rounder!

He wanted to join OHF because he hated to stay in his tent in the camp all day, feeling bored. Now, his favourite thing to do here is to help Fifie on the logistics team, because she gives him a lot of freedom.

She says about him: “Having Mohammed added to the logistics team has made our work load lighter. He is very energetic, and is not only keen to learn, but also teaches us ways of organizing and creating more space in the storages. He is an all rounder, he sometimes takes care of the café, loves painting and helps the maintenance team. We are very happy to have such a resourceful person volunteering with us.”

On the weekends, his favourite thing to do is walk in the mountains around Mytilene, as he loves the sense of freedom he feels there!

Some weeks ago, Mohammad received a positive decision for his case, which means that for now he can remain in Greece. We are very happy about this!