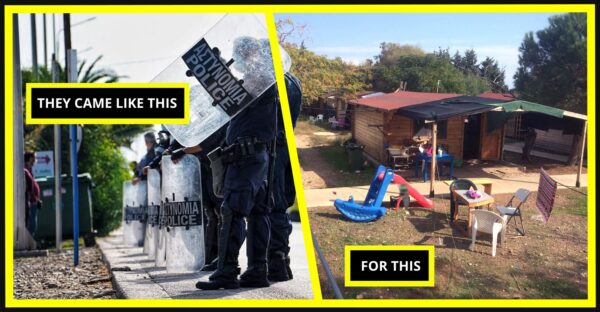 Lesvos Solidarity – Pikpa, a solidarity structure which was created in 2012 by locals hosted refugees since years in dignified accommodation, welcoming some of the most vulnerable cases (such as victims of torture, victims of shipwreks, LGBTQI+ individuals, single parents etc.). The vulnerable people were officially referred to Pikpa – because no other accommodation could meet their needs. With a community based approach, they created a space, where the people can feel home, respected and being treated as equals. And their way of working inspired many other actors – including us.

Today, without prior notice, without official announcement, without proper information and preparation, the people were evicted from their homes and will be brought to Kara Tepe. Everyone knew, that this day will come and that the eviction will be unavoidable. But this action shows, that they have no interest in the wellbeing of the residents of Pikpa. For weeks, the people were waiting and fearing for this day to come. With little to no information about when and what is going to happen to them.

While camps, which are failing to meet basic humanitarian standards, are built and filled with people within days, those who build communities instead of camps are hindered and criminalised. This is yet another example for the failure of European migration policies which are fare away from respecting the basic human rights such as article 25 of the universal declaration of human rights: “Everyone has the right to a standard of living adequate for the health and well-being of himself and of his family, including food, clothing, housing and medical care…”

We will never understand, why people are not treated with respect and as equal human beings. Today and always, we stand in Solidarity with Pikpa, because “You can take the people out of Pikpa, but you can never take Pikpa out of the people”. Sending love and strength to all people from Pikpa – the residents and the team.