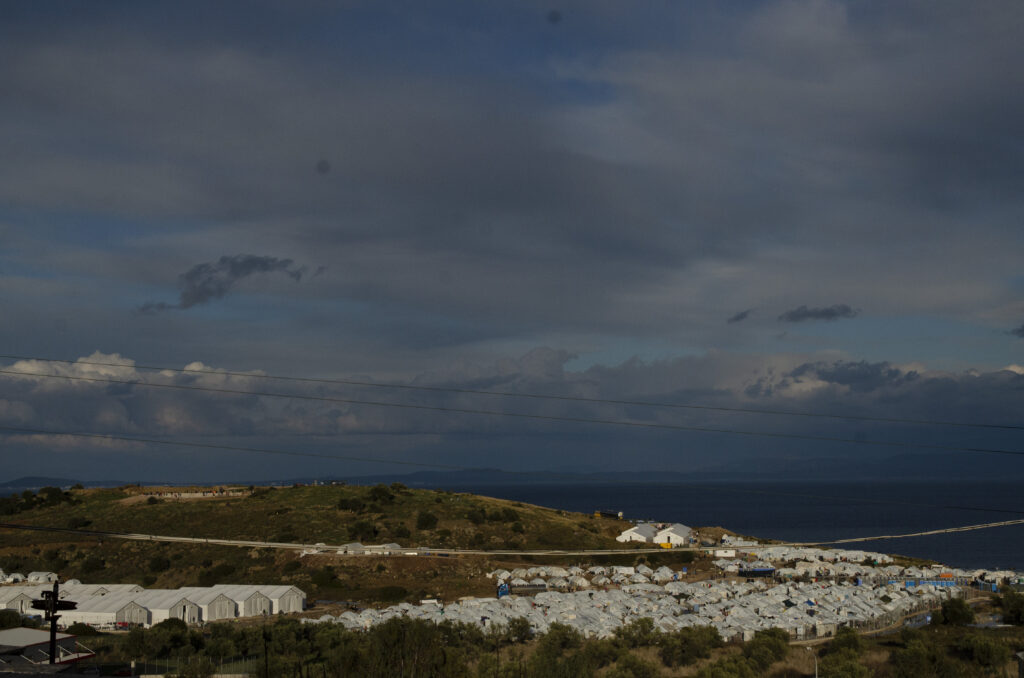 Covid in Greece and Lesvos

To avoid a third wave of outbreaks, a tougher lockdown has been imposed for the whole of Greece with a curfew starting at 18.00 daily. The new variants of the virus strains are spreading in Greece, many SMEs and the closed hospitality sector are suffering, and the hospitals are predicted to be unable to handle a third wave. Over 700’000 Greeks have already received the vaccine, and a digital vaccination certificate is in planning.

Winter proof tents in the end…

According to the Minister of Migration and Asylum, the temporary camp Mavorouni has enough toilets (355 for over 7’000 people), showers, as well as protection against floods and heavy rain. It took four months to get the tent camp ready for winter – at the end of February, when most of winter has already passed. Looking at pictures from inside the camps however, the living conditions are far from humane.

MSF reports that the 2.000 children in Mavorouni camp are suffering from panic attacks and total apathy, and that cases of self-harm are increasing significantly among children under 10. The catastrophic living conditions in the new camp rob the children of all hope, leading to the complete breakdown of their coping mechanisms, leaving them without the will to live. Read more about the disturbing situation of the children (in German only).

The planned closed controlled camp on Lesvos was accepted by the municipal council of Mytilene with a small margin of 16 against 15 votes. The closed camp would replace all other forms of “accommodation” such as camps and rented apartments. The capacity remains unclear. Locals on Chios and Lesvos have mobilized for protests against the new structures. Akra Pachy has been selected to be the new location on Chios, and Thermi on Lesvos. Civil society organisations are opposing the plans of the Greek Government, warning that these new structures resemble prisons.

Greece rejected many asylum applications from Syrian nationals but was unable to deport them to Turkey. Turkey is considered a safe country but refuses to take any people in since a dispute late 2020. This leaves these people stuck in “limbo” without access to material support in the middle of a pandemic.

The EU and Afghanistan renewed a deportation agreement facilitating forced removals back to a country where violence and instability are still present.

At the same time, a German Court decided that refugees who first arrived into the EU via Greece cannot be returned to Greece because there is a “serious risk of inhumane and degrading treatment” and a lack of basic needs being met, such as food, housing and access to the labour market.

Until February 15, only 7 boats with a total of 173 people arrived on the Aegean Islands. During that same time, there are reports of 13 boats pushed back with 370 people on board. The total population on the Aegean islands is 15’771 migrants and refugees, out of which 8’978 are registered on Lesvos (February 15).

Integration and rental subsidies programme
By mid-February, 26,182 refugees are registered with the HELIOS programme for integration and rental subsidies. This corresponds to 41 percent of the total people registered in Greece. Only 10,735 are receiving rental subsidies. Many NGOs are very concerned that vulnerable people and people who were forced to leave their accommodation during the current pandemic (OHF January Newsletter) won’t be able to become self-sufficient under the current lockdown. They point out that the absence of long-term integration programmes will result in homelessness, and call upon the Greek government to not evict refugees during winter and the ongoing pandemic.