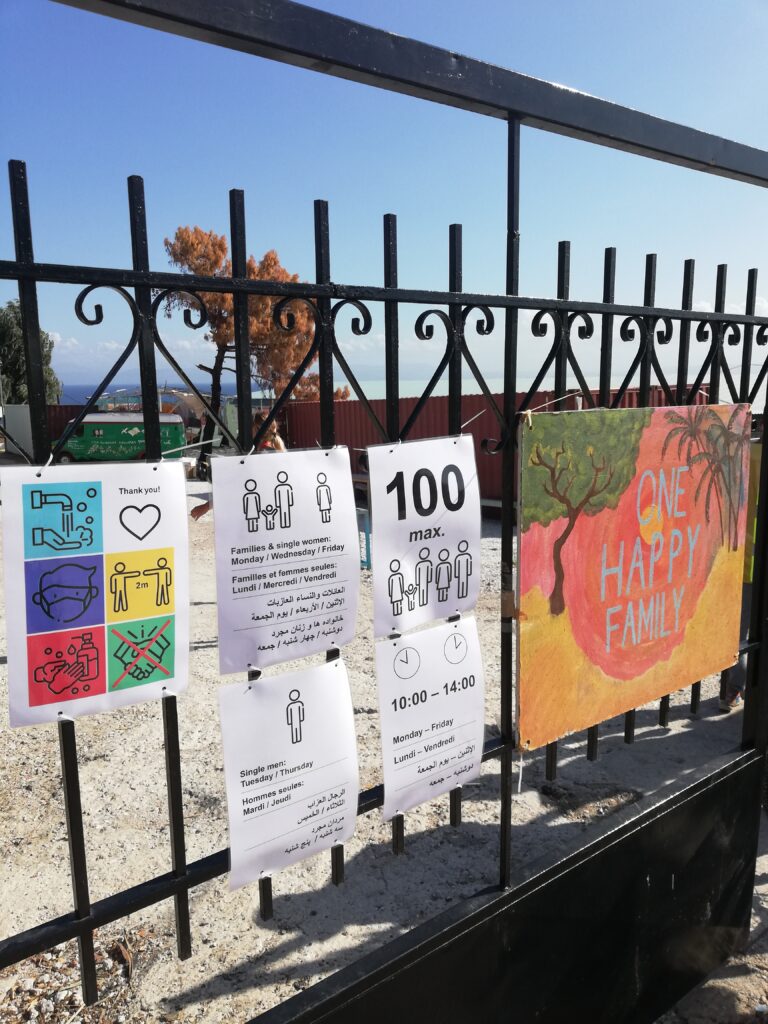 This was the year

The year started with nearly 20,000 people forced to live in Moria camp and the surrounding area. 42% of the residents were children, with 17% of those, unaccompanied or separated from their families. There were fights and tensions on a regular basis with deaths and injuries from violence or unsafe conditions feeling like a regular occurrence.  At One Happy Family, we were seeing nearly 1,300 people a day, escaping the cold and misery that was Moria RIC.

January and February saw tensions boil over with both the local community and the refugee community. The Greek Government had announced they would build ‘closed’ camps instead of addressing the root causes of the appalling, inhumane and undignified conditions that refugees are forced to live in. Such as overcrowded camps over-capacity, slow processing of asylum claims, and poor support and resettlement from and through the EU. This crisis has been going on for 5 years. This systematic violence is ongoing, watched and with the knowledge and acceptance of the European Union. We also saw disgusting attacks from far-right extremists against refugees, locals, journalists, and volunteers. It was a fairly scary and unpredictable time, and we made the decision to close OHF temporarily for things to settle down a bit.

Like the rest of the world, Greece was put into lockdown in late March due to Covid. Transfers to the mainland were cancelled, asylum interviews were postponed, and there was a further restriction of movement on refugees leaving the camp up until August. Covid further highlighted the deep divisions and inequalities that have built up year after year, and the loss of faith in institutions that are meant to support and protect the most vulnerable. Despite Covid, people kept arriving to Greece seeking safety, but many met with illegal pushbacks, injuries and death in the Aegean Sea.

Two massive fires also shaped our 2020, one in early March at OHF, and one in early September at the Moria Registration and Identification Center.

The fire at OHF broke our hearts but also helped us reset, and review what we do at One Happy Family. We wanted to take this moment to rethink our everyday operations and repurpose parts of the Centre. We have also been lucky with the help of Yahia, to establish a OHF support network in Athens for former community volunteers.

A patient and talented team of community volunteers cleaned the burnt down parts of OHF during April, May, June and July and reconstruction started as soon as possible. Moria RIC and the other camps were put on a strict lockdown in April due to Covid, while the rest of Greece remained open. Even though we faced many restrictions during the lockdown, we supported the people locked up in the camps. We distributed hygiene bags to the OHF community volunteers, washed clothes via The Lava Project, had online Greek and English courses for different levels, provided our community volunteers with phone data to be able to attend the classes and to stay in contact with friends and family, communicated with our volunteers inside the camp as much as possible to stay connected and support them wherever needed and possible.

The prospect of Covid-19 reaching the camps led to a huge wave of solidarity within European countries. Leave no one behind! This wave of protests and activism led to the relocation of 1500 refugees to Germany and to the new EU migration pact. Unfortunately, the pact did and still does not address the many problems refugees face nor enable humane living conditions on the Aegean Islands.

In August, OHF was ready to reopen its doors and Covid safety measures were in place across the community centre. However, the unjustified harsh lockdown remained in place. Therefore, we could not open our doors to everyone yet. We also changed the approach for our community volunteers in order to have them even better prepared for their future by preparing better organized language classes, more skills training and integration counselling. This all got lost a bit in our very busy days with over 1’000 visitors each day, but with the time to restructure ourselves we decided to change our focus again and focus on more contact with every person at OHF.

After several people were tested positive for Covid inside Moria RIC, a fire broke out and destroyed the whole camp on the 8th of September 2020. This left more than 12’000 people without shelter, food, sanitation facilities or anything else for almost two weeks.

In the middle of this mess, we at OHF at least were able to open our doors for everyone again. On the third day of our reopening, we already had 100 visitors, the maximum allowed number due to Covid.

We had already teamed up with other local grassroot NGOs during the lockdown to provide support to people outside of OHF and we mobilized our team once again after the big fire. We helped provide hygiene bags, supported food distribution on the streets and much more until the people were ushered into the “temporary” tent camp Mavrovouni (Moria 2.0.) Still today, over 7’000 people remain locked up in these 1000 tents.

After filled months of activities at the OHF such as firefighting training, clothing distributions and many in-person classes, Greece went into a second lockdown on 7th of November. But this time, we were much better prepared to shift our support to the virtual sphere. We have continued our daily classes online over Zoom (Greek, English and computer classes). There have been challenges with internet connections and different learning needs, however it has been great fun, and very successful! We have also started a Zoom hangout lounge, everyday at 12pm for the whole team. This is an opportunity for everyone to check in with one another and have some laughs.